Diamond Stained (Secret of the Jewels 1) 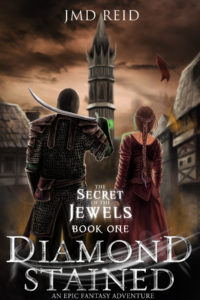 To escape his dark mistakes…

Life had gone wrong for Obhin. Once a respected palace guard, now he sells his sword as a bandit. Trapped by his mistakes, he has no hope.

Until one young woman sees more in him.

Avena, passionate and headstrong, has no patience for bullies. Dedicated to healing, she struggles to escape her own bleak past. In Obhin, she sees a chance for them both to escape.

In Kash, a city of poverty and vice, the two must find trust in the other to protect those they care about. Dark sorcerers, underworld crime bosses, and brutal bandits scheme to use and destroy them.

Can they polish clean their stained souls?

Ruby Ruins (The Secret of the Jewels 2)

Obhin has found new life defending Dualyn, the famed magical engineer and his servants. With the daring Avena at his side, Obhin takes the fight to the enemies that seek to use Dualayn’s talents for their dark and selfish ends.

When a raid goes bad, Obhin finds an enemy that not even his resonance blade can face. A betrayal that cuts so deep it shakes him to his core.

And threatens to destroy Avena.

Only in the ruins of the ruby city can hope be found. Can Obhin find the strength to face the darkness once more?

You’ll be enthralled by this fast-paced and exciting fantasy story because of the rich characters will keep you reading.

Obsidian Mind (The Secret of the Jewels 3) 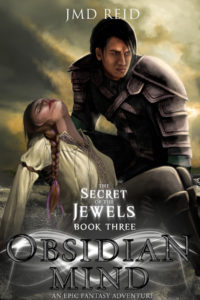 How deep into the darkness…

will Obhin plunge to save his love?

Last summer, Obhin thought they had hidden the most vulnerable part to Avena, the woman he loves. If any one were to find her disembodied mind, they could threaten her life.

Their enemies have found it.

Now Obhin has to risk not just his life, but his very soul to earn it back. With his magical blade, he’ll have to commit high treason. A bleak future lies before him. An irreparable act which will forever sunder him from Avena.

But what else can he do? Let her die?

You’ll be enthralled by this exhilarating and heart-pounding epic fantasy story because of the rich characters.

Emerald Strength (The Secret of the Jewels 4) 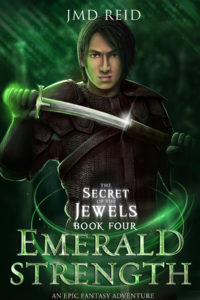 Even the broken can find…

the strength to fight!

Crippled by the assassination attempt, Obhin has to adjust to his new life. No longer can he swing his magical sword and fight at Avena’s side.

The White Lady and the Brotherhood are scheming to break the Warding and flood Kash with demons. Avena is giving her all to keep the city from falling into chaos and prop up the king’s weak rule.

How can Obhin help her when he can’t even stand.

He will have to find that strength within him to rise to the fight. If not, he’ll be swallowed by his own darkness and lost.

Will he stand? Or will he fall?

You’ll be enthralled by this exciting and emotional epic fantasy story because of the strength of characters.

Amethyst Shattered (Secret of the Jewels 5) 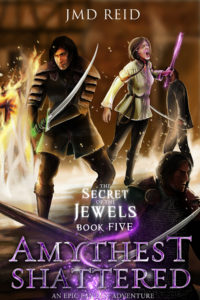 Darkness has cracked the world!

The White Lady’s plan has succeeded!

Obhin and Avena’s fight to protect their home has never been more deadly. The world has cracked. A Rift of Night opens onto a demonic realm. Monsters out of forgotten myth rampage through their city.

Obhin must rally the defenders before all is lost. With his magic blade, he’ll plunge into the horde and drive them back.

Will his sword be enough?

As Obhin fights, Avena must delve into esoteric secrets. Only by unraveling the secret of the jewels will she have any hope of sealing the rift. Time is running short. If she cannot discover the truth, destruction will consume her home.

Does she have the strength to fight through her own guilt? Or will she be lost to the darkness, too