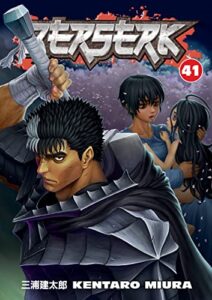 BERSERK 41 arrived at my house. I opened up the envelop from Amazon not realizing what it held. My stomach dropped at the sight. The last of BERSERK Mirua wrote and drew before his death last year.

I read it. I absorbed it.

The volume was full of many lighthearted scenes of the various characters in Gut’s band as they enjoy themselves on the elf island. Caska, still traumatized by what happened to her, is healing. We get answers on the Skull Knight and the Moon Child.

And those were some beautiful scenes with Guts and Caska interacting with the Moon Child. Their child that was stolen from them by Griffith to be his new body. And then… that final scene.

Mirua was at the finish line. What we had in 41 was the calm before the storm. The last breath before the confrontation between Guts, Caska, and Griffith.