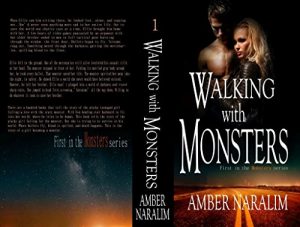 Ellie, a young woman, is hunting for her brother. Months ago, a shady, quasi-governmental organization kidnapped her brother and is experimenting on him. With the help of Reese, an escape test subject and man with a dark beast lurking inside him, she is on a quest do what it takes to free Edward.

To do so, she has to trust Reese. And she does, but she doesn’t trust the monster lurking with in him. Reese is a man who has a literal monster in him waiting to burst out and kill anyone, even her. She needs Reese’s monster to save her brother, but each time he unleashes it, the monster, as personified by Reese’s alter-ego Vincent, stays in control longer and longer.

But as much as Vincent scares Ellie, he also attracts her. Dark, powerful, and deadly. Every moment around Vincent is walking a tight-rope with death. But Ellie needs to save her brother, and if that means walking with a man-eating monster, she’ll do it.

Walking with Monsters is a roller coaster of a novel. It plays with many of the tropes we see in modern vampire and werewolf romances, the woman in love with a man who has a dark, predatory beast bursting to come out. But Reese/Vincent’s beast isn’t lovable or tamable. It is out of control. It is murderous. Naralim does not shy away from the destructive power or uncontrollable hungers of the beast and how it affects Ellie.

But Ellie is driven. Bad people have her brother, and she grows more and more calloused the more violence she sees. She’ll do what it takes to save him. She’ll become a monster herself if that’s what it takes.

The story hops between Ellie and Reese/Vincent, delving deep into the complexity of their relationship as they travel as fugitives across the US, hunted by the police and shady organization’s mercenaries, and then to other characters, including the chief scientist behind the experiments, an investigative reporter, and the FBI Agents tracking down Ellie and her monster.

The story is great, fast paced, with the evolving relationship of Ellie and Reese/Vincent at its heart, keeping you reading through the twists and turns. Naralim pulls out a few surprises. My only gripe is the constant POV shifts in a scene, but that did not diminish my enjoyment of this amazing book one bit. Walking with Monsters is a gem in the Indie publishing world and the paranormal romance/urban fantasy genre.

I’m looking forward to reading the rest of the series.

You can buy Walking with Monsters from Amazon.