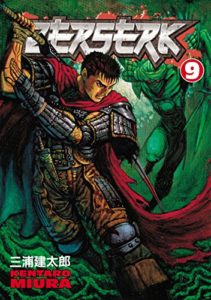 Guts has left the Band of the Hawk to find his own dream. He wants to stand as Griffith equal as his friend. But Griffith needs Guts. He’s the one person Griffith truly trusts, perhaps even loves. Losing Guts has sent Griffith reeling. Needing to take control of his dream, he sneaks into Princess Charlotte’s bedroom.

The naive princess, in love with Griffith, surrenders her virginity to him. Lost in the throes of passion, Griffith can only think about Guts. It is the beginning of the end for Griffith’s dream. He is caught sneaking out of her room and thrown in the dungeon. The king, jealous that his daughter would rather have a commoner than himself, orders Griffith tortured to death.

The Band of the Hawk, oblivious to Griifith arrest, assemble for their morning muster. Unarmed, they are attacked by the king’s army.

Guts has no idea any of this has happened. He’s on his own quest and has a sinister encoutner with the Knight of Skeleton. In one year, Guts’s is told, everyone he knows shall perish. Sacrificed.

Miura really upsets the apple cart with this one. Up until the end of the last volume, Griffith has never had a loss. He’s never made a mistake. He has defeated everyone except Guts. What should be a little hiccup in his plan instead chokes it away. It is over. He’s imprisoned and tortured. His army is decimated.

And a moan whose lost everything is a desperate men.

The prophecy given only makes us, the reader, aware that what we saw in those early volumes will soon come to passed. We’ve wondered what could make Griffith sacrifice his loyal army. Sacrifice Guts, who had become his friend. Now we see. The pieces are falling into place. The story marches on with a tragic pace even as it has moments of joy.

The stuff between Guts and Caska at the end of the volume are some of the best scenes in BERSERK. The pair have slowly been opening up their wounded souls to each other. One moment of happiness before we head into the horrors of the eclipse.

Miura masterpiece continues to unfold! If you’ve watched the original Anima from the 90s, then you’re already starting to see the divergence with the character of Silat, who plays a big role in about twenty volumes, being introduced here. The art continues to be great. The characters are complex and full of pain and hopes, dreams and joys.

If you love fantasy, especially grimdark fantasy, then you need to read this graphic novel series! Don’t be put off by the violence. There is a truly powerful story being told.

You can buy BERSERK Vol 9 from Amazon.