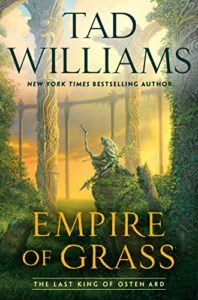 When we last left off, Prince Morgan, the grandson of Simon and Miramele, is fleeing into Aldheorte Forest fleeing the attack at his camp. At the Hayholt, Simon is struggling to hold the High Ward together as their deadly enemies, the fey-like Norns, are planning to attack and resume the war that ended thirty years ago. His wife, Queen Miramele, sells into the viper’s nest of Nabban to bring peace to two feuding power. In the grasslands, Unvar declares himself the Shan of Shan of the nomadic Thrithings and promises to drive back the foreigners encroaching on their grassland.

And behind much of this misfortune, Simon’s trusted adviser, Parcelleus, plots Simon and Miramele’s deaths and the end of their rule.

The characters are thrust into new danger. Everything is in upheaval. The past of the last three decades is crumbling. Treachery and betrayal are undoing everything Simon and Miramele had achieved in their youths while the Queen of the Norns has reawakened after the wounds she took at the end of the war. Competing interests clash and clatter. Events are spiraling out of everyone’s control.

Chaos threatens to destroy all.

It’s a great followup to the Witchwood Crown. It’s full of twists and turns, misfortune and misunderstanding sparking new conflicts, disrupting plans on both sides. The plot is engaging, keeping you reading to find if Simon and Miramele can hold their life’s work together and protect their grandchildren.

Will Prince Morgan survive being lost in the forest? Will Parcelleus treachery lead to Miramele’s death in the chaos of Nabban? What will happen to Count Eolair as he surrenders to the men who attacked and butchered his men? The Norn are descending on the world of men while they’re torn apart by petty conflicts.

Williams prose and story structure are engaging. The cast of characters is engaging, especially the trolls. They again are a favorite of mine. His plot has more pieces going than the original series, but he’s keeping it going so far.

Things have never seen bleaker. I can’t wait for the next book in this series!

You can buy Empire of Grass from Amazon!