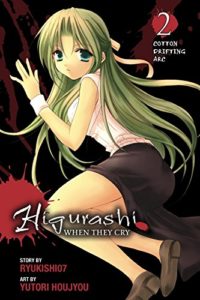 It’s the night of the Cotton Drifting Festival. Keiichi Maebara, newcomer to the village, wants to watch the ceremony, but Shion (twin sister of Keiichi’s friend Mion) wants to show him something. They find two individuals breaking into the sacred storeroom for the shrine. With everyone in the village watching the ceremony, it’s the perfect time to break in.

Inside, Keiichi learns the dark past of Hinamizawa. A history of human torture of those who break the rules. For the last four years, the village has been punishing those who supported the dam project that would have seen village destroyed.

This year, they’ll have to punish the four people who entered the sacred shrine.

As Keiichi realizes just how bad the situation is when he learns that the two people who broke into the shrine with him and Shion have been murdered. Worse, other people whom Keiichi and Shion confided in have gone missing. It’s clear the secret leadership of Hinamizawa is cleaning house. How much longer before they come for Keiichi?

While the first volume of this story is rather peaceful, things ramp up fast in here. Paranoia sets in and things get nuts. After the last volume, we saw that Mion and Rena were possessed by demons. It seems that same force is at work as we learn more about the history of the village. The tragedy plays out to the bitter end. The horror is intense.

But it’s all so tragic. Once again, close friendships have ended in bloody murder. The culprit is different, but the results are just the same. There is something wrong with this village. What is the truth of what is going on?

What will happen when the time resets for the next arc? As always, look for the things that stay the same. There are little clues for what is really going on.

This arc, while tragic, is well done in what it’s purpose is. Ryukishio7 has created a scenario that serves to fuel the mystery. The art is great. I especially like the color drawings at the start. I like how they use different artists for the arcs, matching them up with the corresponding answer arc.

You can buy Higurashi Cotton Drifting Arc 2 from Amazon.