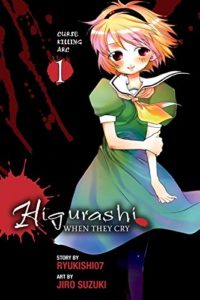 Once again, everything has reset. Keiichi (newly moved to the village three weeks back) has just returned from that two day trip back to Tokyo. Things appear to be playing out the same as the last two times only now we’re focusing more on Satoko. Things have shifted, allowing Keiichi to get to know Satoko before.

She’s adorable beneath her hyperactive facade. She’s looking for love, abandoned by her family who have died or vanished. In Keiichi, she’s finding what she lost a year ago when her older brother Satoshi “transferred schools.” Satoshi and Keiichi have a great relationship. The playfulness and bit of sibling rivalry is capture well, along with a level of affection that will inform the second half of this story.

As always, Keiichi learns of the villages dark secret and Oyashiro’s curse. Clues are dropping as we, the reader, are struggling to understand what is truly going on. What leads to these “demonic” possession and the friends turning on each other in horrible ways.

Beneath it all lurks something nefarious. A woman has been found brutally murdered. The police are investigating. It’s something new to story. Is this the even that triggers off this scenario? How does these events relate. The questions are building and building.

The mystery of Hinamizawa continues.

Now, while the story is sweet and heartwarming (for now), there’s a problem using different artist for the scenarios. The last two produced some great, high-quality art, the characters looked great. This artist isn’t as skilled. The characters are little more cheaply drawn and less detailed. It’s a shame because I think the last artist could have really captured Satoko and Keiichi’s relationship better.

Still, this is a great series. The characters continue to be great, their personalities consistent (until things start going crazy). The clues to what is going on are scattered throughout, placed so well it’s only in hindsight that you can really make sense of the true story happening in the background.

If you’re a fan of mystery and horror, Higurashi is one of the best manga (and properties) in the genre. You can’t go wrong with reading the original visual novels, playing the game, watch the anime, or read the manga, you can’t go wrong.

You can buy Higurashi Curse Killing Arc 1 from Amazon.