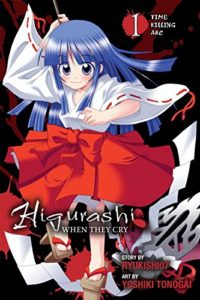 In 1985, two years after the Hinamizawa Disaster, a detective named Akasaka learns that the young child he met seven years ago on a case was murdered in the shrine the night before the volcanic eruption released the toxic gas that wiped out the village.

The story flashes back to 1978, when the village of Hinamizawa is in the middle of protesting the dam project that would see their village flooded beneath an artificial lake. A high profile politician’s son was kidnapped and the village’s protest group, known to be violent, is suspected. Akasaka is sent to investiage. There he meets Rika Furude, a little girl respected by the village. Akasaka isn’t happy to be on this assignment since his wife is in the hospital with complications from her pregnancy.

He gets to know Rika as he’s given a tour and learns about the village. They seem friendly and he has a hard time believing they could be behind the kidnapping. That is until Rika suddenly begins talking like an adult and warning him that he should leave before he regrets it. She predicts that the dam project will fail within the year and he’ll only find grief if he stays.

Undaunted, Akasaka soon learns that his cover is blown and he maybe in danger from the Sonozaki family. Will he stay, or will he leave?

This short arc provides a lot of the back story. It shows us there is something up with Rika. She’s shown herself to have a surprising maturity at times in the story, dropping her girlish act. Now we see her giving threats to Akasaka that have the young detective unnerved.

This arc has mystery and gives us clues, providing a great transition from the question section of the series and the answer part. We see that the Hinimizawa disaster and Rika’s murder happen in multiple timelines since the Oishi of this timeline doesn’t go missing in the woods while investigating Teppei Hojo’s murder like in the last arc. It’s a hint towards what is going on, though we are still struggling to understand it.

There is something evil in Hinamizawa. The question is this: is it Oyashiro’s curse or is there a human culprit working in the background. We’ve had both the Sonozaki family put forth as the human cause, and the curse punishing the wicked on the other end. But the story is murky, and like all good mysteries, nothing is what it seems.

What will Akasaka find with Oishi?

Higuarshi is an intriguing and engaging series. The characters are likable, making you feel for them when things go wrong over and over again. You are rooting for these characters to survive one of these summers. Will they?

You’ll just have to read this series to find out.

You can buy Higurashi Time Killing Arc 1 from Amazon.