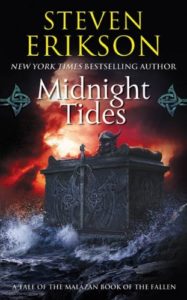 At the end of Book Four, Trull Sengar began to tell the story of how he became chained to the wall in the drowned pocket of Kurald Emurlan.

As the events of Deadhouse Gates and Memory of Ice was happening (sort of, since the Silanah stuff really throws off the timeline) on the other side of the world, the Tiste Edur tribes have been united by the Warlock King. They are facing annexation by the greedy Lether to the south, a nation merchants who want the natural resources in Edur lands. They have destroyed other tribes through shady treaties and deliberate betrayals.

The Warlock King has a new ally. He plans to send the Sengar Brothers (Fear, Trull, Binadas, and young Rulad) on a quest to receive a gift in the arctic wastes north of their lands. Will it prove the salvation of their people or their ruination.

Another set of brothers, Beddicts, have their own goals. Tehol Beddict appears impoverished after his financial collapse, but he had actually discovered the secret to destroying his people’s economy and flinched. However, when those whose people were destroyed by the Lethers want him to try again, will he accept? In the palace, Brice Beddict is the king’s champion. Emroiled in the complex politics of Lether, he vows to protect his king even if the man isn’t worthy of his devotion. Last, Hull Beddict plots his people’s destruction in another way. He wants to save the Edur from the fate of other tribes, weighed down by guilt.

A large cast of characters, both mortal, undead, and immortal, clash and swirl. This is one of Erikson’s best books in the series. Tehol and Bug number among my favorite duo and it was great to read them again. Tragedy and misfortune swirl as no one’s plans quite work out right. The darkest parts of humanity are exposed once more.

This fantasy series continues to be unique and amazing. If you haven’t read any of Malazan Book of the Fallen, you need to. It is worth the journey.

You can buy Midnight Tides from Amazon.