Nyssa Glass and the Cutpurse Kid 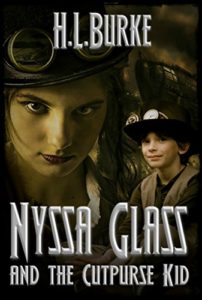 Settled into their new life, Nyssa and Ellis have opened their own repair shop. They need this business to be successful as Ellis’s money is dwindling fast. But when they catch a pickpocket trying to steal Ellis’s possessions, Nyssa sees herself in the young boy, something Ellis recognizes. The couple adopts the boy, to give him a new life like Nyssa had from her dead mentor.

But the cutpurse entering their life couldn’t have happened at a worse time. Nyssa’s past has caught up. Her uncle, the man who turned her into a thief, appears. Not dead, like his criminal partners had claimed when they tried to use Nyssa, but in prison for the last decade. Thinking Nyssa must have quite the stash, he wants his cut.

And he’ll do anything to get it.

The theme of identity comes up over and over in these books, from the computer AI in the first novella, to the true identity of the young couple in the last book. Now Nyssa’s true identity as a thief is released to her new community by the man who made her into one. It’s a tense story as you watch all Nyssa and Ellis’s hard work to start over ruined by a greedy man who doesn’t understand the true meaning of family.

Like the other Nyssa Glass novellas, this one has heart that keeps you reading. Burke has really found magic with the characters of Nyssa and Ellis, and you want them to succeed against the obstacles laid out before them. Another excellent novella.

Fans of fantasy and steampunk need to check out this delightful young adult novella.

You can buy Nyssa Glass and the Cutpurse Kid from Amazon!