The One Who Could Not Fly (The Wing Cycle 1) 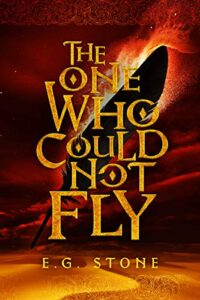 Ravenna is born different from all the other sylphs. Not only does she not have the same skin or wing coloring, but her wings are stunted. She’ll never fly like the others. She’ll have no place in their society, always looked down on as an outsider.

Try as she might, she just can’t overcome her birth defect. All she can do is help her people in other ways. By being a scholar. When she’s sent out on a mapping mission, she comes across something out of legends: Humans.

Thinking her an angel, they capture Ravenna and haul her across the sea to their lands to sell her as a slave. Thus starts the cruel journey of Ravenna as she learns just what she is capable of as she has to use all her wits to survive.

As she suffers as a slave, Prince Davorin has just murdered his brother, heir to the Empire. A bid for power, he thinks he is the only one that can save it. But he’ll have to face the machinations of a power-hungry sister and the uncaring apathy of a father who loved only one of his sons.

And that one is now dead.

Stone’s book was a great read. From the question of how Prince Davorin’s scheming would connect to Ravenna’s capture and enslavement, the book keeps you reading. It flows well, making for a fast and engaging flow. It’s well-paced and Ravenna is a charming character.

She has quite the journey from naïve outcast to slave survivor. She’s put into the crucible and has to use all her knowledge to survive. The story has some great suspense and well-done action. All in all, it was a great read and left me hungry for more.

If you’re looking for a fantasy book with a great female character who strives and struggles for everything, then check out The One Who Could Not Fly!

You can buy Oath from Amazon.