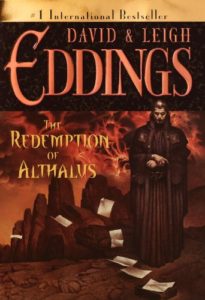 Athalus, an unrepentant thief, is having a string of bad luck. All his life, Luck has helped him succeed in all his capers. And then he decided to visit the rich cities. Instead of a string of successes, he has one mistake after another.

Frustrated, he returns to the territory he knows best. He’s learned his lesson. Only when he enters his normal haunt, a man named Ghent wants to hire the thief to rob the House at the World and steal a book. Eager for the challenge, and hoping his luck has returned, Athalus agrees.

Only the occupant of the house had other ideas. Esmerelda the Cat has a mission to rehabilitate the thief and turn him into the savior of the world!

The Redemption of Athalus is a book fans of Eddings will love. Athalus is like Belgarath the Sorcerer mixed with Talen, with Esmerelda Aphrodite grown up. It’s a fun read if you like Eddings style, but it is full of Deus ex. The plot may not have the most agency to it, but the characters and their interactions shine. A host of colorful characters are recruited by our thief on his path of redemption and join the fight against the dark god. This could have almost been a book series in and of itself, but Eddings keeps the plot focused. It flows and moves.

If you’ve never read Eddings, I would start with Pawn of Prophecy or the Diamond Throne, but if you’ve read most of his books and enjoyed them, then you have to give this book a try!

You can purchase The Redemption of Athalus from Amazon!