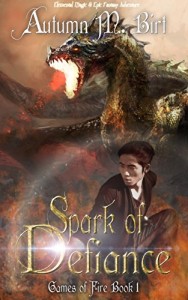 4 thoughts on “Review: Spark of Defiance (Game of Fire 1)”