The Sorceress of Darshiva (The Mallorean 4) 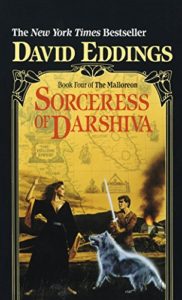 The fourth book of the Mallorean brings Garion, CeNedra, and their companions closer to stopping Zandramas from sacrificing their infant son to cause the rebirth of the Dark God of Angerak. Their journey has taken them across the vast continent of Mallorea to the ancient, island nation of Melecene. Here they may finally lean some clues to aid them on their quest.

Because not only do they have to track down Zandramas, but they have to find out where she is going and beat her there. They have to follow a trail scattered through prophecies and esoteric tales. Once they have their trail, they will have to plunge into war-torn Darshiva.

The home of Zandramas herself.

The penultimate novel of the Mallorean continues the journey through the lands of Mallorea. No longer are they truly hunting Zandramas any more. Destiny is ensuring that both groups will arrive at the fateful meeting. It’s just a matter of which of Garion’s friends and companions will survive the encounter now. Things only grow more complicated as all the story-lines Eddings has been spinning—Zandramas’s bid to power, Emperor Zakath seeking to restore order, and Urvon’s alliance with the demons—are colliding together in Darshiva.

The stakes are high as they companions creep across Darshiva.

While I enjoy the Sorceress of Darshiva, it is my least favorite of the ten books of the Belgariad/Mallorean saga. While the characters are great, and there are some great writing and events, the pacing is a little wonky. While the first series had a sense of immediacy about it, with this series it’s clear that they won’t get the upper hand on Zandramas until they get to “The Place Which is No More.” Putting Destiny, which has always played such a big role in the series, so much in control is really showing the lack of agency on our heroes as they come to accept this reality. Not even CeNedra is getting frustrated any longer.

Still, it is a great book, and it leads us into the final volume in the Saga! Next up, The Seeres of Kell and the end of Garion’s story!

You can purchase Sorceress of Darshiva from Amazon!