The Unholy Consult (The Aspect-Emperor Book 4) 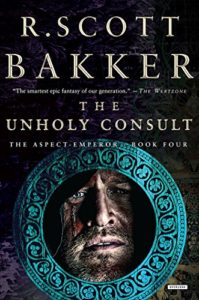 The close to the Aspect-Emperor series is upon us. The Second of the three series that makes up the greater Second Apocalypse series. Act Two is over, and what a powerful part it was. The Great Ordeal must deal with the consequences of eating Srancs as they make the final march to Golgotterath to save the world, led by Proyas. Achamian and Mimara race to join the Holy War so the Judging Eye may finally gaze on the Aspect-Emperor himself, Anasûrimbor Kellhus.

The fate of the world hangs in the balance, resting on the shoulders of one man. But is he truly the prophet he claims to be that will save the world, or will he doom it and side with the Unholy Consult itself, trading the fate of all for freedom from Damnation.

For Bakker fans who’ve followed the books since the Prince of Nothing, this is the moment we’ve been waiting for. What will the Dûnyain do when he reaches Golgotterath and stares into the Inverse Fire. Will he betray the world to save himself or to embrace the Logos? Will he agree with the Consult’s plan to close the world from the gods and end damnation by exterminating life.

This book is tense and visceral. It hurtles you forward towards the climax with breathless anticipation. The characters we’ve followed for seven books collide together at the end. Reunions, betrayals, and more abound. Bakker keeps you on the toes. I’ve never read a Fantasy series where you felt the world could actual end.

Where you truly feared that the man destined to save it would ultimately be its destroyer.

Bakker must be praised for bringing about this dark and powerful tale and leaves you breathless for more. (And there is more coming, confirmed by the author that he’s already working on the third series). While the ending is shocking and leaves you wanting more, there is so much to this book to digest, to mull over, and ponder as we wait for more.

Once again, Bakker reminds us why he’s one of the best writing fantasy today.

You can buy The Unholy Consult from Amazon!