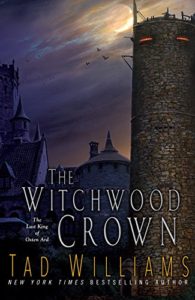 Once again, Tad Williams brings us back into Osten Ard. Over three decades have passed since the climatic battle at Green Angel Tower and the defeat of the Storm King. King Simon and Queen Miriamele have ruled the High King’s Ward to the best of their abilities. In their fifties now, they face the greatest challenge to their rule as slowly, bit by bit, a new darkness creeps in, subtle, stealing away their allies, and making new enemies beneath their very noses.

Their heir and grandson, Prince Morgan, would rather drink in taverns and bed whatever accommodating girl he can than learn statescraft. Unable to please his grandparents and haunted by memories of his own dead father, he will have to find himself if he has any chance of facing the growing darkness that seeks to engulf Osten Ard once again.

Because Uttuku, Queen of the Norns, has emerged from her decades long coma. And she hasn’t forgotten her hatred of mortals.

The Witchwood Crown is a dense story, with dozens of characters spanning across the world. From familiar characters grown old like Simon and Miriamele, to new characters, Tad Williams breathes new life into his world, building on the fallout of the last trilogy to set the stage for this new one. From politics to action, he weaves it all together wonderfully.

And it is both a treat and a sadness to revisit the world, seeing our characters grown older, some who’ve died over the years, or vanished without a trace. Other times it’s a wonderful reunion, like meeting old friends you haven’t seen in so long, catching up with them, seeing how they’ve changed in someways and how they’ve stayed the same in others. If you’re a fan of Tad Williams work, then you have to read this series.

And if you’ve never read any one of his books, he provides enough background information for you to understand this series and enjoy it. His prose flows, his characters are entertaining, and the tension that courses through the books, simmering in the background, keeps you going as it builds and builds towards its finish!

You can buy The Witchwood Crown from Amazon!