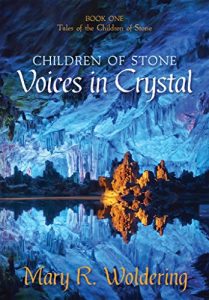 2 thoughts on “Review: Voices in Crystal (Children of Stone 1)”