Today we’re getting to know Robert Cano. He is the author of The Dark Archer, an intriguing fantasy book!

1. If you were stranded on a desert island, what three books would you want with you.

Three books, huh?  That’s a tough one.  I think I’d have to go with The Silmarillion, Hannibal, and The Vampire Armand.

Those are some interesting choices. I’ve read two of these and maybe the last one. I don’t remember those Ann Rice novels that much any more and how far I got. I know I got through Queen of the Damned.

2. What animal best describes your personality?

3. If there was one place in the world you’d love to visit, where would it be?

Just one?  Ouch.  I think I’d have to go with either Iceland or China.

And like any good writer, you managed to slip in a second choice, LOL!

Is both acceptable?  I think cats more closely resemble my attitude toward life.  But dogs are always so kind and loving and excited.

I suppose both are!

5. If you could have a dinner with one historical person, who would it be?

Probably Alexander the Great.  The man was a tactical mastermind.

That would be interesting. He had some great ideas. Love how he dealt with war elephants.

Now let’s get down to brass tacks and find out about Robert’s writing.

1. Besides writing, what are you passionate about?

Reading!  I also love spending time with my family (although with recent events I’ve discovered that there can be too much of a good thing), and I love movies and video games.

2. What drew you to the craft of writing?

At first it was poetry.  I began writing poetry in earnest when I was around 19 and in college.  Trying to impress the girlfriend or some such craziness.  Thankfully, me, and my poetry, grew out of that…

Awesome. It’s so interesting where life can lead us.

3. When writing a novel, are you a detailed planner or do you fly by the seats of your pants?

I am definitely a pantser.  The strange part about it is that I have had the world in my head for so long that it sometimes feels like it’s already happened, I’m just chronicling it now.

It’s always interesting to hear about other author’s processes. That’s how Steven King often describes it.

4. Tell us why we’ll love reading The Dark Archer

Life and what it means, the chase for redemption, for hope.  And all with something as dark as a wraith to find these things.  In my book, as with Fae lore, the wraith is a soulless entity, frightening to all in the world, for it must feed off of the life of those in the world, always searching for completion…  I think we can all relate to that.  There are some pretty heavy topics within it as well, for my characters deal with the concepts of PTSD and depression.  In the end, however, there is always hope.

5. Inspiration is such a fascinating phenomenon. Where did the inspiration for The Dark Archer come from?

I had written a short story to submit to an anthology, and although it was turned down, I was told that the story was not only good, but merited a longer telling.  That story is currently on ice, but my novella, The Suffering (which comes chronologically before The Dark Archer) gives the background to a character I introduced in that short story.  The Dark Archer is a spinoff of The Suffering.

That’s how my current series came about. I created a short story called the Assassin Remorse, the first complete fantasy story I ever finished, and I created this jewel-based magic system. I never planned on going anywhere with it, but people really liked it and I started thinking of it and it blossomed into a large series of books.

6. The concept is fascinating. A character trapped between life and death. Were there any particular challenges in writing this series?

I think my main challenge was having to be careful as to how I navigated the MC.  Bene is incredibly powerful, and his power only grows throughout the next book as well, but to balance all of this, I gave him both physical and mental/emotional limitations to what he could do, or would be willing to do.  That internal struggle is indicative of any of us throughout every day life.

Yeah, you have to watch out with a character that’s too powerful.

7. What is your favorite character from the Dark Archer?

I think my favorite character would be Feorin.  He is a satyr war hero who was stripped of his honor and exiled when he decided to walk away from the war he had known all his life.  The Great War was all he had ever known, and he was a high ranking official, but all he wanted was peace, and for his actions in war, redemption.  The only reason he wasn’t killed upon abandoning the war, was because of his heroism…

He sounds fascinating. This really does sound like a great book.

8. What is next for you and writing?

Well, later this year, the sequel to The Dark Archer comes out.  This new novel picks up a few months after the end of The Dark Archer, and then sweeps us off on a whirlwind of an adventure.  Our favorite characters must discover the origins of The Shadow Cult, and then figure out how to survive it.  In the process, they also discover a far more sinister enemy, one that may be coming back in the distant future.

I bet your fans are eager to read it! You really have something that feels special here.

9. Last, do you have any advice for a new or aspiring author?

Run away!!!!  Just kidding.  My biggest piece of advice is to learn learn learn.  Read, learn, apply.  Repeat.  Take what works for you and apply it in your own way into your work.  We must never stop learning.   But what I think might be the biggest thing is find your voice.  Don’t be another author.  Be you.  And then become the best you you can be.

That’s the best word. Authenticity sales. People are good at sniffing out the fakes.

Thanks for the chat, Robert! 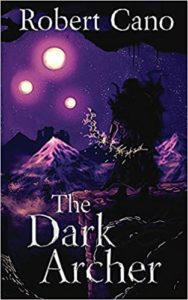 All he wanted was the safety of his princess. What he received was eternal torment. Bereft of a soul, a wraith who should have no ties to humanity, Bene wants nothing more than release from his twisted existence. Trapped between life and nothingness, he hopes to reclaim his soul and find the death he so desperately desires. Bene finds rare solace in the company of Feorin, a satyr war hero who chose exile over continuing the centuries long war with the Fae. He doesn’t look at Bene with fear or contempt, but rather hope. If a wraith can find a path to redemption, perhaps he could as well… 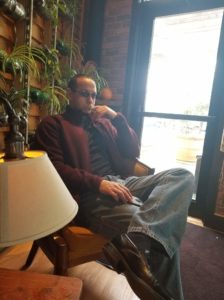 To purchase Rober’s works, you can find him anywhere, but Amazon is probably easiest.