Storm of Chaos (Heirs of Destiny 3) 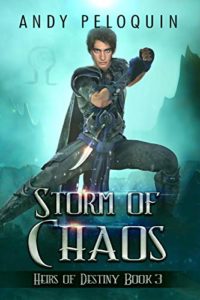 A new threat arises in the City of Shalandra. The Gatherers have more than one way to destroy it in the name of their death god. Evern and Kodyn both have to set aside working on their true reason for being in the city to deal with this new attack.

The Azure Rot Disease has mutated. It now kills in hours instead of weeks. It’s quickly clear it is not natural. While they have been dealing with the political machinations, the Gathers have been readying an even deadlier assault.

Evern has other problems to worry about, too. Hailen’s heritage was revealed by Briana to the Secret Keepers, a priesthood who do not reveal the truths they guard. To save their lives, Briana has no choice. But now Hailen is their prisoner to aid in their research.

Aisha, here to aid Kodyn, has her own problems. She needs to find a way to control her powers before they destroy her. She can’t just give them up, though. The strength they give her is necessary to save the city.

Peloquin weaves his storylines together, the characters pasts, missions, and desires all entwining and branching off. Conflicting interests, various groups, and politics all vie for dominance in a city on the verge of exploding. For the Gatherers have other ways to attack.

The story flows fast, action bursting across the pages. The characters face even greater danger as the story hurtles you forward. It’s a hard book to put down, most pages leading you to want to keep reading to find out what happens next.

Fans of Fantasy need to check out this series. It’s a thrill to read. The prose is good, the action clear, and the characters have their strength and flaws.