Reread of The Dresden Files 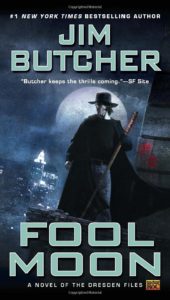 After devouring the first book of the series, Storm Front, in a day (I miss my younger years when I could do that), I was eager for more. I was hooked from the very beginning thanks to Harry’s advertisement:

Now I was eager to dive into Book 2 and find out what new adventures were in store for the only practicing wizard in the city of Chicago. Like the first book, I devoured Fool Moon. Butcher does a great follow-up to his first book, building on the events that happened which all impact the plot of this book from the strain in Dresden and Murphy’s relationship, the politics of the city, and the activities of the gangster Johnny Marcone.

And even better, it’s about werewolves. And not just any werewolves, but all of them. Butcher manages to take all the dispirited different versions of werewolves from mythology and legend and weave them into his story, giving different flavors. The world building of the Dresdenverse is always something I enjoy about reading them.

Be warned. There are SPOILERS ahead. It’s a given that I’ll be spoiling this book and may touch on themes that happen later in the series, but I will keep those to a minimum. This is an amazing book series. While each novel is a standalone story (though that line did blur with the last few), there is an overarching mythology and plot points spawned from this very book. If a character survives and had a modicum of impact on the story, expect their return. Butcher gathers a rich tableau of allies, enemies, and frenemies for Harry Dresden while weaving myths from every culture into a seamless universe.

So lets dive into an amazing urban fantasy series!

If you haven’t gotten bored yet, click her for Part 1