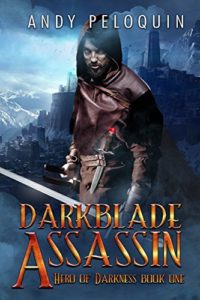 Voramis is a city where every vice can be experienced and every sin indulged. In the dirty back alleys where the beggars eek out a painful existence and the perfumed corridors of the nobility stalks the Hunter. An assassin so feared, whispers of his almost demonic powers are heard in every alehouse and whorehouse.

The Hunter is a man without a past. The first thing he remembers is walking into Voarmis already carrying his dreaded dagger—Soulhunter. The dagger whispers in the Hunter’s mind, begging him to kill. His soul drenched in blood, the Hunter struggles to keep whatever threads of his humanity he can.

Everything changes when the Hunter kills a noble in bed with the Bloody Hand, the powerful syndicate that controls crime of Voramis from the shadows. The Bloody Hand are tired of the Hunter’s interference. They want to make an example of the rogue Hunter and show the citizens of Voramis just who controls the city. And those the Hunter care for will pay for his mistakes.

Darkblade Assassin is a fast paced, dark tale of revenge and redemption. The world the Hunter lives in is stained with filth, but moments of beauty emerge, whether its the orphan girl pushing her wheelbarrow of flowers or a young mother holding her child. Andy Peloquin keeps you reading the the hurtling plot, adding twists and turns as the Hunter carves a bloody path through the city.

The Hunter is a fascinating character. A man of with a thirst for blood that wars against his own nature at all turns. He exists only as a series of disguises, never letting even those he cares for to see who he truly is. His desire to protect the unfortunate dregs of Voramis is at odds with his dark soul.

If you’re a fan grimdark fantasy or just an exciting, fast-paced plot you’ll enjoy the dark world of the Darkblade Assassin!