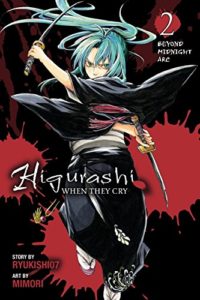 In the ruins of Hinamizawa, twenty-three years after the disaster, a group of strangers realize there is a murder among them. Takumi, the boyfriend of Yae, was found strangled and left in the shrine. Who among them is the killer? Did Otobe really “lose” his friends and how did his cell phone break? Is Mion Sonozaki really who she says she is since she was reported killed in the school terrorist incident twenty-three years ago? Is Ryunosuke really a journalist working on a reporter?

Something strange is going on tonight. The dead are bleeding over into the living as the strangers have to reveal their pasts to survive the night. Because they are not alone. Another will is moving against them and if they don’t work together, none will live to see morning.

This is quite the exciting volume to read. The mysteries are mostly resolved early, along with showing the supernatural is a real thing in Hinamizawa. Theories are bandied about, giving clues on what may or may not happened to village along with some hints for the Answer Arcs to come.

For those who know this series, there were some poignant moments. We’ve seen that these arcs end with at least a few of the main characters dying. Now we get to see the effect the story has on the survivors. There are a few clues to what needs to be done to succeed, a line from the dead that will help ensure the summer of 1983 can be defeated.

If you like mystery/horror manga, or those stories in general, Higurashi is one of the best. It’s engaging and intriguing in turns. The art is great in this one. The action is exciting. The characters have to make choices and face the consequences of their actions.

You can buy Higurashi Beyond Midnight Arc 2 from Amazon.