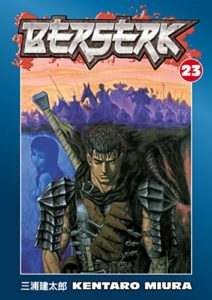 For two years, Guts has spent his nights battling the demons and evil spirits drawn to the brand on his neck. It pushed him to his limits. Now he has to protect Casca, too. Her brand and his only draws more spirits while her shattered mind doesn’t understand what is going on. To protect her, he only makes her hate him.

The evil spirits pray on his wounded emotions. He loves Casca, and they use it. Seeking to feed on his passions, the spirits will drive him to acts that will only frighten her more. How can he defend her while protecting her happiness?

Perhaps allies is what he needs. Has Guts’s solo war finally come to an end?

In Midland, the Kushan invasion continues to devastate. A young noble named Mule has to choose to defend his people or live to fight another day. Rumors, however, persist that Griffith and the Band of the Hawk have been reborn. Are they Midland’s salvation?

Miura jumps between the two stories, showing the desperation of Guts’s situation contrasted with the reborn Griffith. His powers have never swelled so fast. Everything seems to fall into Griffith’s place like fate itself has been manipulated to ensure his success. Delving into the nature of casualty and free will, Miura explores what happens when you’re able to change the odds and ensure every toss of the dice lands your way.

The Godhand have put their plans into Griffith’s shoulders. They are inspiring the world, allowing Griffith to achieve his dream of his kingdom. But what will happen when he has it? Why are such evil beings seemingly so altruistic?

On the other side, we have Guts struggling to protect Casca. His emotions are raw, bleeding. She’s right there, but she can’t stand his touch. Her trauma has scarred her so badly and the evil spirits haunting them only exasperated matters.

Miura’s characters come to life as always. The art is great. This continues to be an amazing fantasy tale!

You can buy BERSERK Vol 23 from Amazon.