The Demon Lord of Karanda (The Mallorean 3) 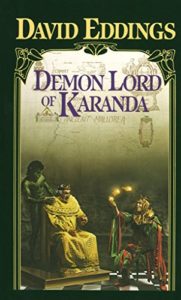 The third book of the Mallorean sees Garion, Ce’Nedra, and their companions captured by the forces of Zakath, the emperor of Mallorea. Instead of continuing their pursuit of Zandramas, who stole Garion and Ce’Nedra’s infant son months ago, they find themselves embroiled in the politics of the emperor’s court.

In a part of Mallorea known as Karanda, demons are once again being seen. One more threat to the world grows while Garion suffers the frustration of being a “guest” to the Emperor of Mallorea. Despite the strange relationship growing between the two monarchs, Garion needs to get back in pursuit of his son and stop the growing threat of the demons.

But how can convince the atheistic Zakath that the demons are more than just a fantasy, and that the threat to the Empire is a true one and not just political maneuvering on Garion’s part to escape? Will Garion and his diverse, and skilled, companions have to employ other means to escape?

Demon Lord of Karanda dives deeper into the growing schism among the Grolims as the various factions vie for control over both the mysterious Sardion and Garion’s own son, the sacrifice to bring about their Dark God’s rebirth. Zakath, a minor, though interesting, character from the final book of the Belgariad is back and fleshed out even more. What’s clear is that Eddings had a solid backstory for Zakath and his enmity in place for the Murgos in the last series but never could organically explain it. Until know. It is rich world-building at its best.

Even better, we finally get to see this Boundless Mallorea as the characters travel to the largest city in the world, its capital, and then venture into the dispirited lands that make it up, united through fear of the imperial throne and the glue of the Melcene bureaucracy. All of our characters get to shine. Unlike with the Belgariad where some of the prophesied companions (Taiba and Lelldorin especially) get little to do, Eddings has roles for all the characters to play in the political machinations of the Mallorean court.

This book brims with danger, political machinations, and adventure. Fans of the Belgariad and the first two books of the Mallorean series will be delighted by what they read here!

You can purchase The Demon Lord of Karanda from Amazon!