King of the Murgos (The Mallorean 2) 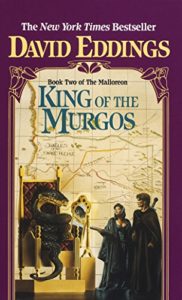 The infant son of Garion and Ce’Nedra has been kidnapped by Zandramas, the new Child of Dark, to be used as a sacrifce to awaken a new God of Angerak. With Polgara, Belgarath, Durnik, Silk, Errnd, and the mute Toth, Garion and his wife set off on a new quest at the behest of prophecy to stop Zandramas’s plan and to rescue their son.

But the trail will take them far from their homes. They travel south to find it once more in the land of the snake people and from their, into the land of the Murgos. Out of all the four Angerak races, the Murgos were the most ferverant in their devotion to Torak and the most under the control of the Grolim priests. Steeped in barbarism and sacrifice, Garion and his companions find themselves in the court of the beseiged Murgo King.

They are in for one interesting revelation. Prejudices must be adjusted and old enmities put aside for Garion, Ce’Nedra, and their companions, including those new allies they pick up along their way south, to have any hompe of saving the infant Geran before it is too late. Can Garion and his companions escape the machinations of the Grolim priesthood, dark assassins, and petty grievances?

After spending the last series characterizing the Murgos as this despicable race, Eddings peels back the onions to reveal that, in fact, they are just people. Flawed and varied as any other only suffering beneath terrible despotism of mad kings and power-hungry priests. Loosing a war, King Urgit is desperate for any aid, and Garion might prove his salvation or his undoing.

The second book is a great read, building on the first book. It covers most of the original book 2’s contents (traveling through Arendia, Tol Nedra, and Nyissa) within the first third, meeting old characters, encountering new threats, and exposing the existence of the three powers all vying to awaken the new Agerak God. New characters join the party to add a nice counterbalance to the core ones (it’s no coincidence that the group with the most screen time from the last series made it into the party in this one). Velvet, in particular, is a great addition.

Eddings is clearly having fun writing this series, and it shows in the fun diologue, exciting situations, and tense showdowns. He has an entire world to play in and is mixing and matching the threats, combining old foes with new while foreshadowing things to come. Garion and Ce’Nedra are the most changed from the last quest, both grown up and both dealing with the kidnapping of their son in different ways. The vibrant and even aggressive Ce’Nedra is shrunken and withdrawn, verging on depression, while the normally friendly Garion has an anger brewing inside of him that explodes out of him, fueled by frustration and fear.

All in all, the Mallorean continues to be excellent and leaves you wanting to find out what happens next! Luckilly, these books came out in the 80s, so you don’t have to wait long at all!

You can purchase King of the Murgos from Amazon!