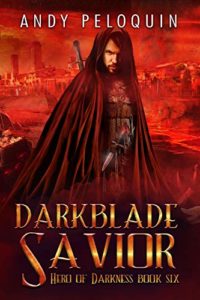 The Hunter has finally reached Enarium and he has finally found his wife. The mysterious woman who has haunted his memory, vestige of life he lived before his memory was repeatedly whipped for the last five thousand years.

But is Taiana the same woman he loved. Can he trust the woman who plunged a dagger into his chest despite what he feels for her? Does he have much choice? Because the world is about to end. The demonic Sage has also arrived in Enarium. His forces hold the city. The energy gathers in its bowels.

Soon, it will be unleashed along with the Destroyer.

The Hunter will have to figure out what is going on, how to save the young boy Hailien, and stop the Sage from unleashing the embodiment of entropy onto the world? After all the Hunter has learned, he’s about to discover he knows nothing.

This concludes the first arc of the Hunter’s story. And it is amazing. The story flows form twists and turns, peeling back the obscuring millennia that has hidden the truth of the story. The characters are great. Peloquin has already made you care for the Hunter and Hailien, now he has new characters to flesh out. You ache for the Hunter and his wife to have their reunion, but not even you the reader can trust her. It gives a sense of impending doom looming over everything. That one false step, and it will all come crashing down.

This series was a satisfying read. It hurtled you along, carrying you from one breathless action piece to the next. Each one built and built towards the epic conclusion. It was a great ride, and I’m glad that the Hunter story isn’t over. I’m eager to see where the story goes next!

Fans of fantasy, you have to check out one of the up and comers in the indie fantasy market! Andy’s works are astounding!