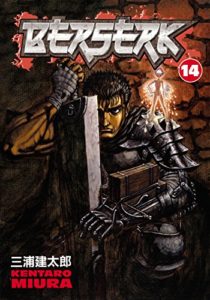 Newly recovered from his injures suffered from the eclipse, Guts has to face his new life living in the boundary between life and death. Thanks to the brand he received when Griffith offered him a sacrifice, evil spirits seek to devour his soul.

And he’s not the only one branded.

Caska, her mind reduced to that of a child after being raped by the demonic Griffith, has no idea the danger she’s in. Guts has to race to her fast to protect her from the demons. But will it matter? Even if he saves her, she now fears and hates him, so traumatized by her experience. Her mind is broken. Nothing is ever the same.

All that is left for Guts is vengeance. The Black Swordsman we met at the beginning of this series is born.

Volume 14 also jumps us to two years later, putting is after the events of the early volume. Guts, now traveling with Puck, is about to find another one of the demonic apostles. He has another chance to find vengeance.

Miura’s epic continues. For those who watched the original anime, this volume carries it beyond what that started. From here on out, the story isn’t known. We don’t know if Guts will survive his vengeance. We don’t know if Caska will ever regain her sanity. All we can do is march with Guts ever on, trying to defy fate in a world that has lost all hope and given in to evil.

You can buy BERSERK Vol 14 from Amazon.