13 Hours: The Inside Account of What Really Happened In Benghazi

by Mitchell Zuckoff with the Annex Security Team 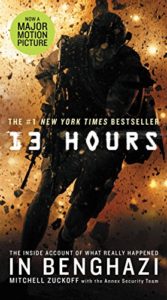 On September 11th, 2012, the US Diplomatic Mission in Benghazi, Libya came under attack by Islamic Militias. Four men died over the next thirteen hours as a fierce gunfight raged through the night in the volatile city. This book is not about the political, partisan controversy that has mired what happened in Benghazi, but the members of the GSR—Global Security Resource) civilian contractors hired by the CIA to protect their clandestine sites—as they fought to protect themselves and other Americans that night.

The book first lays out the groundwork, discussing the history of Benghazi for the last several centuries so you can understand how the events of that night trace their roots back in time. Then it discusses who the GSR are. All are ex-military drawn from Navy Seals, Delta Force, and one Marine. These are men who had families and could make good money for a few months work in distant corners of the world. They didn’t want to fight. They just wanted to finish their tour and get back home.

Like a good history, it connects you with the participants. You get to know the operators, two of whom died during a mortar attack that night, and Ambassador Chris Steven and Sean Smith, who perished when their diplomatic building was set ablaze while they hid in a safe room. The book draws you into real, living history, letting you draw your own conclusions about the controversy.

Any fan of military history, will find this book to be a great read. It recreates, as best as possible, a terrible night. It makes an event argued about over and over by politicians grinding their own axes into something real and personable, cutting through all the bickering and backbiting that has characterized the tragedy since.

You can buy 13 Hours: The Inside Account of What Really Happened In Benghazi from Amazon.