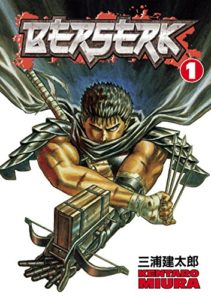 The Black Swordsman is a demon in human flesh. A man scarred and battered, is missing an eye, and has an iron hand in place of his right. He wields a massive sword that can shear through an armored knight. He inspires fear where he goes.

And what he fights is far more terrifying.

On a quest for vengeance, consumed by an almost inhuman rage and anger, the Black Swordsman is carving a bloody path through the servants of true demons. Grotesque monsters with preternatural strength. They murder, they rape, they cannibalize those they rule over. Petty despots with inhuman powers clinging to their immortality.

The Black Swordsman arrives in one village where a one demon, Kora, rules. The local village sends women and children to be feasted in a cowardly attempt to protect themselves. The demon’s soldiers drink and whore as they please, knowing their inhuman master’s deadly reputation defends them. But the Black Swordsman doesn’t fear Kora.

He picks a fight and the carnage beings.

The start of BERSERK is a powerful beginning. Miura doesn’t pull any punches in his world. BERSERK is the banner of grimdark fantasy. There are no good choices. Innocent people get caught up in the horrific events, bystanders too weak to survive the growing darkness in the world. Our hero, Guts the Black Swordsman, is so consumed with anger and rage he doesn’t care about anything but but his revenge. He wields a weapon of such size it should be comical, but Guts is drawn with such a deadly grace, at once both lean and powerful muscled, a man who is a veteran of a thousand battles. He thinks, he plans, and he executes without flinching.

All we can do is wonder at the events that produced such a man. It is clear why he is so scarred and hardened. The enemies he fights can transform into towering monsters. They are capricious beings that delight in blood and carnage. Everywhere they go, they bring misery and death as they satiate their own base desires. It is a world without hope. A world on the verge of being swallowed by the darkness.

A world in need of a savior. Can Guts be that for them? Or will his own hatred and anger destroy him?

The art of BERSERK is detailed and fantastic. Miura forgoes the more traditional “big eyes” look of other Manga artist, instead using a very gritty, realistic, and Western style of art that fits well with his fantasy setting. Everything is drawn with care and detail. He has real skill at bringing to life his medieval world in all its sordid details.

The only way to find out is to keep reading!

You can buy BERSERK Vol 1 from Amazon.