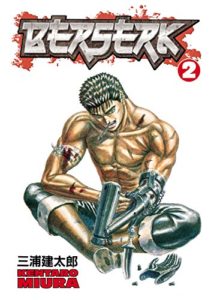 Guts, The Black Swordsman, is on a quest of vengeance that has lead him to a town under the dark grip of a demonic count. A monster of cruelty who butchers and tortures “heretics” in his quest to purify his town. Vargas, a man whose family was consumed by the count before him, begs Guts to slay the count and free the town. Guts will do it, but not for Vargas.

Guts has his own reasons to kill the count. His own vengeful past.

The count, however, won’t sit around and wait for Guts. He has created a monster of his own, an extension of his demonic powers, and unleashed him on the town. Guts will have to use all his skills and wits to survive the machinations.

The second volume shows us the strength in Miura’s writing. While the violence and gore can suck a reader in, it’s the strength of his characters that keep you reading. Guts is a man consumed by hatred. He shows no compassion, even to a crippled character like Vargas. He despises Vargas, and you catch small glimpses why. Guts is in many ways like Vargas. Both are maimed and scared. Both have suffered torture, and the reader is getting an inkling that this torment came at the hands of the demonic entities behind creating the Count: the Godhand.

The characterization is subtle, but great. We have the count, an absolute monster who struggles to hide the truth of his demonic nature from his young daughter. He wants to keep her safe from the ugly realities of this world. You can see glimpses of the man he once was before he summoned the Godhand with the behleit. From his daughter, you start to understand how his quest for killing heretics has mutated into something far, far worse as his demonic nature has corrupted him.

The world of BERSERK continues to be bleak. There is no hope. No chance for any heroics. Like an grimdark story, the hero doesn’t get to be pure good. He has to roll in the mud with the enemies. He has to stand by and let good men die.

Puck continues to be a great foil against Guts. The small fairy, while on the surface just providing comic relief, has a great deal of insight. He has some great moments in this volumes of compassion and empathy, catching glimpses of the true man trapped in the cage of anger and rage Guts is trapped in. The story keeps you reading. You want to find out why Guts is this way, where his weapons came from, how has survived so long with the mysterious “brand” on his neck. Though some questions were answered, more are needed.

If you like grimdark fantasy, you NEED to read BERSERK. If you like good fantasy storytelling, the violence and gore is graphic, but what’s beneath it is full of all those things that make humans great: love, passion, friendship, hope and more. Just in a world this dark, it is buried by the muck and mire and has to be freed once again.

You can buy BERSERK Vol 2 from Amazon.