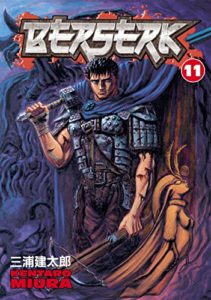 The Band of the Hawk, thanks to Guts’s help, have rescued Griffith from the Midland dungeons. But their ones handsome and charismatic leader has been reduced to a scarred, shriveled shell. Every tendon in his body severed, his tongue removed, the flesh almost wasted from his body. He’ll never command an army or ride into war. The dream of their mercenary band rising again looks futile.

And they’re not even out of danger. The King of Midland has unleashed Wyld and his Black Dog Knights, a band of savages who spread brutal suffering wherever they go. They are on the hunt for Griffith. Nothing will stop them from their rampage.

But Wyld is not like other men. When Guts turns to face him, he feels that terror fill him as if he stands before Zodd or the Knight of Skeleton. Wyld is no man. Once again, Guts has to fight another demon. Will he have the strength to win this time?

Well, yes, we know that. The one thing we don’t know from reading this series is the fate of everyone else. What happens to Caska, Pippin, Rickert, Juduea, and the rest of the Band of the Hawk. What led to the tragedy of the now-broken Griffith becoming the demonic Godhand we met earlier in the story. Is it Wyld that unleashes these changes, or is it something else to come?

BERSERK is building towards that promised moment that turned Guts into the Black Swordsman and Griffith into the demonic god Femto. The stakes are rising, the tension is building, and the characters we’ve grown to care for over the last eight or nine volumes are about to be put into the crucible.

Miura is a master at storytelling. Wyld is a disgusting and loathsome creature, just like the other apostles we met in the beginning of this story (and who had cameo appearances in the last volume). We start to learn just what they are. Do as you will. These are men that appear unbound from the currents of fate, free to act as they will at the behest of dark gods.

But do their actions only further a greater plan? Does Guts’s struggle actually only benefit the very entities he seeks to destroy? BERSERK is a great series that asks such deep and hard questions. It’s a manga unlike few others. It has true depths to the characters, true heart in its pages. Fans of fantasy, especially grimdark fantasy, will find a tale that will captivate them.

You can buy BERSERK Vol 11 from Amazon.