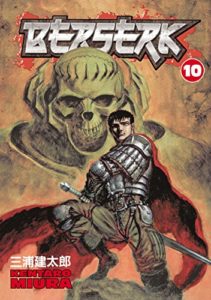 The Band of the Hawk, rejoined by Guts, are ready to break Griffith out of jail. With the aid of Princess Charlotte, still in love with Griffith even after a year of his imprisonment, is willing to defy her father to save him. With Guts at the lead, Caska and the others venture into the dungeons.

But what will they find in the darkest cell? It has been a year of torture for Griffith. Will they even find the same man they once followed? Or will they merely find a broken shell, so brutalized he’ll be an invalid for the rest of his life.

As the Band ventures deeper, dark things move through the world. Something is gathering. A year ago, Guts was given a prophesy. The eclipse is coming, and the evil in the world coalesces to celebrate.

Not only does Volume 10 have some powerful imagery in it, it does more to further the back story and set up so many theories about just what is going on with the Godhand, the enigmatic Knight of Skeleton, and more in this one chapter. Are we witnessing a cycle that happened a thousand years ago played out again? Maybe?

What does that mean for the future of the series? So many great theories out there.

The story continues to be incredible. The artwork captures the emotions, from the helpless suffering of Griffith, the determination of the sheltered princess, and the rage of Guts as he does the only thing he’s good at: swings his sword. The characters and art continues to excel. The passion bleeds off the page. This is writing and art mixed together to make something amazing, something only found in the medium of the comic.

If you’re a fan of fantasy, especially the grimdark subgenre, you have to check out this novel. Fans of Bakker, Abercrombie, and Erikson will find so much in this series!

You can buy BERSERK Vol 10 from Amazon.