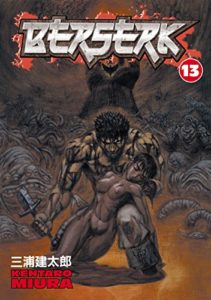 The demonic horde has been unleashed upon the Band of the Hawk. Griffith has sacrificed his former followers to achieve his dream. While he incubates to become a dark god, Guts, Caska, and the rest battle for their survival.

But the odds are against them. Nightmarish monsters abound. They are all hungry for the feast. The hundreds of soldiers, the best trained army in Midland, are no match for their foes. One by one they fall. Familiar faces we’ve come to love perish one by one until it’s only Guts and Caska left.

Guts’s fury carries him far, but even he has finally found his limits here. In the nightmare, forced to watch as Griffith is reborn and comes to ravish Caska. Pinned by demon, his arm ripped off, his eye blind, we finally see the moment that births the Black Swordsman.

A man impotent to save the woman he loves from being destroyed by the man he once thought of as his friend. Thirteen volumes have built up to this moment. We have finally arrived at what shaped Guts into that cold, murderous beast at the start hunting demons, searching for Griffith to enact his vengeance.

Everything good in Guts’s life was snuffed out in a moment. By the selfish choice of one man. And now Guts only has his rage to fuel him. Though he’ll survive the eclipse, he’ll be forever trapped in the boundary between life and death. Can he ever get vengeance?

Can he ever move on with his life?

Will his rage destroy him?

BERSERK continues to astound and amazed. The depth of the characters and writing shines here. It’s powerful to witness it all come undone. How it flows towards this one moment. It feels almost inevitable. Fate has made its decree and though Guts has defied it for now, can he defy it forever. As Slan says, “A fish jumping out to the fiver does little more than ripple the surface.”

If you’re not reading BERSERK, you should be. This story is breathtaking in its scope and themes.

You can buy BERSERK Vol 13 from Amazon.