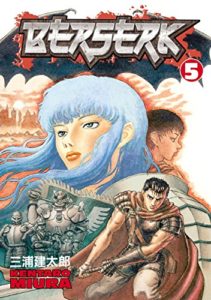 Griffith has entrusted Guts with the important rearguard position on their night raid. Feeling true responsibility for the first time, Guts won’t let his new mercenary company down. Though still a loner, Griffith’s trust in him has inspired him. But can his sword be enough to stem the tide of the enemy hunting down the hawk?

Guts skills, while not the level of the Black Swordsman that he will become, are impressive. He’s young, only fifteen, but he’s grown up swinging a sword from childhood. Forced to use weapons sized for adults, it gave him strength. Now he swings a two-handed blade with skill. He will need it all to keep himself alive.

And that’s not the only threat he faces. Because the legendary warrior, Zodd, is rumored to be on the battlefield. Some say he’s a hundred years and unkillable. An immovable object for the indomitable spirit of Gut’s unstoppable will to crash into.

Miura continues to pen an epic story as he tells how Guts found himself with a new family. One that doesn’t abuse and belittle him. One that doesn’t sell his body for a few pieces of silver. He finds respect. Friendship. Admiration. For the first time in his life, he has found something, but will his own inner anger. His own rage at his childhood abuse destroy everything.

Will Guts forever be that helpless child, vulnerable and overpowered despite how skilled he becomes. “Man takes up the sword in order to shield the small wound in his heart sustained in a far-off time beyond remembrance.” BERSKER is a world of cause and effect. That everything is determined because the way you are shaped dictates how any stimuli will cause you to act. We are seeing that chain of causes that lead us to the Black Swordsman.

And to Griffith making the choice to take up his Behelit and sacrifice all to become a member of the Godhand. Miura has baked his philosophy into the very dough of his story, and now he just has to let it rise to its conclusion.

You can buy BERSERK Vol 5 from Amazon.