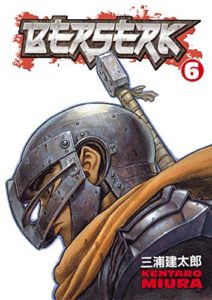 Thanks to Griffith’s leadership, and Zodd retreating from the battlefield after delivering his prophecy to Guts, the Band of the Hawk find themselves heroes. Griffith has the recognition of the king himself while attracting the notice of the king’s young daughter, Princess Charlotte. But such rise in station makes enemies.

While Guts just wants to swing his sword and fight, the Band of the Hawk find themselves in lesser guard duty, protecting Griffith from the machinations swirling around them. Griffith has only one person he trusts to carry out his darker deeds.

Guts will have to become more than a swordsman. But so long as his friend Griffith needs him, he’s happy. Content where he is. Can he stay that way forever? Is he truly Griffith’s friend, or does Griffith expect?

Volume 6 brims with political intrigue and poignant moments. Guts clutching the dying boy’s hand is moving and harrowing at the same time, but the most pivotal moment in the entire series, the catalyst for the train of events that leads to the Black Swordsman happens in this book, in a conversation between Griffith and Princess Charlotte. His words to her will spark something in Guts.

Miura continues to develop his characters in this volume, with Caska getting her backstory fleshed out. We get to see another layer to Griffith. He’s a complex character, still possessing his a boyish playfulness that seems at odds with his cold, ruthless tactics. His charisma shines through even when he’s giving orders that lead to more violence and death.

He has a dream, and he won’t let anything stop him from reaching it. Not even the Band of the Hawk, his loyal followers.

If you’re not reading one of the masters of Grimdark Fantasy, you should be! Berserk is no simple tale. It’s not playful and light like many Japanese Manga. It’s rooted deep in Western storytelling and setting, with mature themes that resonate with the truths they tell.

You can buy BERSERK Vol 6 from Amazon.