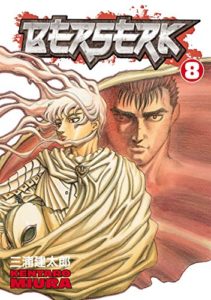 Griffith has gambled everything on his Band of the Hawk taking the impregnable Doldrey Castle. If his mercenaries can’t prevail against the indomitable Holy Purple Rhino Knights and their skilled commander, they are doomed. Guts is at a disadvantage. His sword, damaged from fighting the hundred mercenaries a few weeks ago, has shattered. He faces off against the enemy general armed only with a knife.

His death seems inevitable. But Guts isn’t the type of man to give up.

Inside the castle, Caska has lead in her soldiers in a surprise attack to seize the fortress while most of the defenders are trying to capture Griffith. However, she has come across the very man who offered the bounty on her life. She’ll have to defeat the treacherous Count Corbowitz to win the day for her and her men.

If Griffith plan succeeds, he and his men will be hailed as heroes, delivering the final blow that will end the hundred year war, if they fail…

Miura plunges us into the action in this part as well as the characters. The past few volumes have built up for the climax of this action. Guts has grown from that haunted youth fighting to hide the vulnerable pain in his heart to a man wanting to stand on his own two feet. Not to follow Griffith, but to be his friend and equal. Miura shows the changes in his character in those final moments, mirroring a scene from earlier.

It’s an incredible journey to be had and when you finish this manga, you have to be wandering if this was the moment that changed everything. Is this what lead to that future where Guts is the maimed and scarred Black Swordsman hunting down the inhuman Griffith. The calm, mature man we see in his volume lost to the rage and hatred of a many utterly betrayed. Of a man who only has vengeance.

Miura was smart to show us that future. To let us know where these characters end up and have us wonder how that could possibly happen. Griffith is a driven man, but he’s not heartless. He cares about his soldiers even as he’s willing to spend their lives for his ambition.

The art continues to be great. The action and the characters continue to shine. From fear, to passion, to determination all is captured in Miura’s detailed art. BERSERK continues to impress and amaze me!

You can buy BERSERK Vol 8 from Amazon.