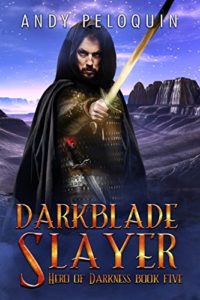 For the Hunter, all his goals converge in Enarium, the lost city of the ancient Serenii. It is the destination of the demon known as the Sage who plans on unleashing the Destroyer upon the world. It is the only place where a cure can be found for Halien, the six-year-old boy who has become a son to the immortal assassin. And, lastly, it is where She awaits. The woman from his lost memories.

He doesn’t know what he will find in Enarium or how he will even find it. It is lost. Treasure hunters for thousands of years have roamed the Empty Mountains searching for it. But he has something they don’t, a clue given by happenstance from Sage. A clue that an ancient play might hold the cipher for the journey. If he can figure it out.

At the same time, old enemies have returned. They have followed the Hunter’s trail across the world. Can he convince them that they have the same goals, or will he be forced to kill them and further weaken himself in the process.

The Hunter is no hero, but he’ll save the world anyways.

The penultimate novel of the Hero of Darkness series is a wild ride. Old friends and foes are back as everything is leading towards Enarium. The secrets of the past are bubbling to the surface along with the Hunter’s memories. A climatic ending is in the works if he can reach it. But the obstacles are large.

As always, Peloquin’s books move fast, plunging you forward through his dark, fantasy world. There are no easy decisions to be found. It’s a brutal world where the fortunes of one can change in an instant. It builds towards its ending and leaves you eager for the conclusion.

If you’re a fan of grimdark fantasy, then you have to try out Peloquin’s work. He’s an indie author worth reading!