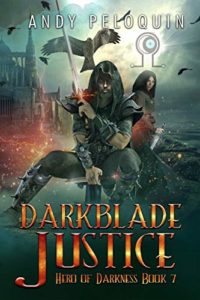 In Praamis, a series of strange murders are occurring and the king is blaming the Night Guild. Illanna, now leader of the guild, has to figure out what is going on and how to stop it. At the same time, the Hunter has arrived in his goal to destroy all the demons in the world.

Two years after the events of Enarium, the Hunter has found no lead on his daughter, but he is still hunting those demons who wanted to destroy the world. But will his presence in Praamis only make things worst?

Things spiral out of control. Will Illana and the Hunter clash while the real threat escapes their notice?

Peloquin is bringing his two series together once more. The Hunter and Illana are about to cross paths and meet. The stakes are high as they both blame the other for what is going on. This series has Peloquin’s fast-paced and exciting style, mixing characters you’ve grown to enjoy over nine novels and a novella.

If you’re a fan of fast-paced, exciting fantasy, you have to check out Peloquin’s series. He has created a rich world full of the possibilities. I’m eager to see where he goes next with this series!