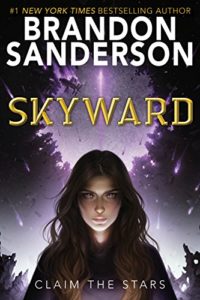 It’s hard being the daughter of a coward.

Spensa, a young girl living on an alien planet, wants to be a pilot like her father. An alien race known as the Krell have driven Spensa and her people to Detritus, a planet far from Earth. Three generations back, their spaceship crash-landed here while the incredible orbital debris keeps them pinned on the planet. As a child, her father was among the first to fight back.

Only in the middle of a pivotal battle, he fled.

Living with the stigma of his cowardice, Spensa wants to prove her own worth. She wants to be a pilot like him, but will her society let her? While they espouse equality and merit, will she ever truly be allowed to fight to protect her people?

Skyward is about a young woman struggling to get out from the shadow of her father. It’s a story about pain and loss, hope and duty. It’s a story about the resilience of the human spirit in the worst of circumstances, a tale of belief and faith. Is Spensa like her father? Will she be a coward, too?

Or can she make her own destiny?

This was a fast-paced and engrossing story. Sanderson has penned another excellent tale, this time in the science-fiction universe. It’s not the hardest science, the technology is never explained, but it’s well-written. It’s full of great characters and powerful emotions.

This is a must-read for fans of Sanderson and good stories alike!