Guardians of the West (The Mallorean 1) 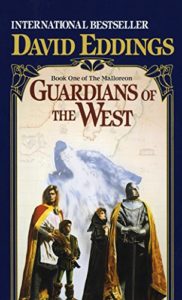 The Guardians of the West picks up almost immediately after the end of the Belgariad. It’s been a few months since Garion and Ce’Nedra’s wedding, and the young boy Errand find himself moving to the vale with his new adopted parents Durnik and Polgara the Sorceress. The group is accompanied by the vagabond sorcerer, Belgarath. After he and Polgara spent thousands of years working to see Torak and the Dark Prophecy defeated, they think they can rest. But hints and rumors begin to stir of a new force awakening in the east while the Angeraks struggle to come to grips with the death of their god.

Over the next five or so years, Garion and Ce’Nedra settle into their married. With a few bumps along they way, they grow to find a balance in their relationship. A balance that is disrupted when Ce’Nedra’s lack of pregnancy begins to worry the other monarchs of the world. Stability is needed for the world after the trauma it’s endured, and there are those who seek to take advantage of it.

Once again, Garion and his companions have to defend the West as new threats arise and hints that there is still more to come in the fight between the two halves of the original Purpose of the Universe. That though Torak was defeated, the Dark Prophecy still moves pieces on the board and a new threat boils beneath the surface.

Guardians of the West is a great follow up to Eddings outstanding Belgariad. He returns to his world and spends an entire book on the buildup to the new threat. He’s subtle, showing us our characters as they fit into their new roles in life, growing into full adulthood (like Garion and Ce’Nedra) while shifting many of Garion’s story role onto Errand’s shoulders. For fans of the Belgariad, it’s a great reunion with old friends.

The build up is handled well. It’s a mystery that has you, thinking you already know everything about the world, wondering what is going on. That moment of realization that there is more to “Boundless Mallorea” than that little slice we saw in Enchanters End Game. The misdirects and the plot twists are great. Guardians of the West is like the first few chapters of Pawn of Prophecy stretched into nearly a whole book.

This is a great start to a new series with our old character. Eddings has to do little retconning to make it work, just tweaking the expectation that the final battle wasn’t as final as everyone (our characters included) believed. It follows on those dangling plot threads left over from the last series while setting the stage for the new adventure to come. If you enjoyed the Belgariad, then you have to read the Mallorean!

You can purchase Guardians of the West from Amazon!