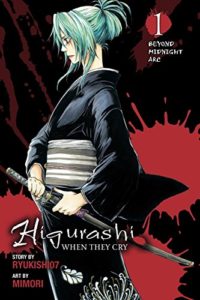 In 2006, twenty-three years after the Hinamizawa Disaster, a group of strangers find themselves meeting up in the ruins of the city. Each has their own reason for being there. Can they actually even trust each other. One claims to be Mion Sonozaki, a resident of the village; another is Ryunosuke, a tabloid journalist writing a story on the haunted village; Yae and her boyfriend Takumi who just happened to drive out to this village; and Otobe, who got out of the car with his friends to relieve himself only to find them gone when he returned.

It’s a stormy night as these strangers gather. Are they telling the truth about their motivation? Is the spirit or entity that caused the mysterious murders in the past still around? Or is it a human agent that lurks in the darkness.

Because it is clear that these characters are not alone. Something still haunts the ruins of Hinamizawa.

This scenario is a version of The Atonement Arc. We get a tease of what happens in this arc in the talk of a terrorist incident at a school and the students who were killed before the disaster. If you’ve read the series, Mion Sonozaki present won’t be a surprise. There are some other hints to the true cause peppered about.

However, if you read this story knowing what is going on, the tension is a little lacking. It’s interesting. The art is drawn in a way to accentuate the tension of the story. The angular look to the characters is effective at the task. It’s several mystery tales all rolled into one and the ending leaves you wondering what will happen next.

For an additional arc, it gives you a taste of the Answer arcs to come with those little tidbits that make sense when you know the entire story. Higurashi keeps being an excellent mystery/horror series. The tension builds great in this arc.

If you’re a fan of these type of stories, check out this series!

You can buy Higurashi Beyond Midnight Arc 1 from Amazon.