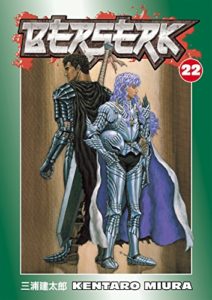 Guts has rescued Casca and returned her to Godo’s place only to learn that the old blacksmith has died. Rickert and Erica are excited to see Guts’s success while Guts is wondering what to do next. He’s rescued Casca while he suspects Griffith has been reborn in the chaos of Albion Monastery.

When a mysterious, silvery-haired figure has come to visit, Guts learns his suspicious are true. Griffith is back in the flesh, apparently human once more. Will Guts finally have his chance for revenge? Will Guts once again throw himself down the path of vengeance?

While Guts faces Griffith, the Kushan army’s invasion worsens. They are butchering the peoples of midland. But there are those who have faith that the White Hawk will save them. Will Griffith be these peoples’ saviors, or the damnation?

Miura shifts gears into the third part of Berserk, and the longest. This part still isn’t done. The art continues to be amazing. The characters emotions continue to shine as their passions collide. Miura’s storytelling continues to expand his world-building, laying the foundations for the new story lines to come.

If you’re a fan of Fantasy, you should be reading BERSERK! It only gets better and better!

You can buy BERSERK Vol 22 from Amazon.