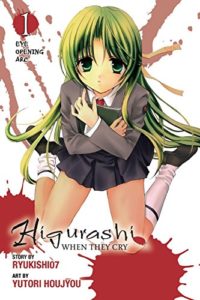 We are launching off the second half of Higurashi. It’s time for the Answers. We pick up in 1982, a year before the main events, with Shion Sonozaki, the twin sister of Mion, escaping from the Catholic girl’s school she’s been exiled to. She’s tired of being away from Hinamizawa. She resents the family tradition of dealing with twins. Her sister is the family heir and to keep her from interfering, the teenager has to stay away.

With the help of same allies in her family and the yakuza syndicate they run, she’s heading back home. Conspiring with Mion to hide out in the nearby town, she is dreading when her grandmother, the current family head, finds out. However, bored, she finds herself sneaking out dressed as her twin sister. When she runs into one of Mion’s classmates, Satoshi, love sparks in her heart.

Soon she realizes the suffering Satoshi experiences at the hand of his abusive aunt. Knowing her family is behind village shunning Satoshi’s family, she wants to help. But how can she stand up to the head of her family?

This arc plays out just like Cotton Drifting Arc save that Shion is the POV instead of Keiichi. The events of that arc hinted that the Sonozaki family is behind the suspicious murders. Shion was captured early on by Mion, held prisoner while she dispensed the family’s justice. With the twins able to pose as each other, the liens of what did or did not happen in that arc were blurred.

Even more interesting, we get to meet the illusive Satoshi, a youth implied to have beaten his aunt to death for the fourth year curse only to vanish mysteriously a few days later. Did he really kill her? What happened to Satoshi?

We’re starting to get answers to these questions as well as see how well one of the three main theories put forward about what is going on is true.

You can buy Higurashi Eye Opening Arc 1 from Amazon.