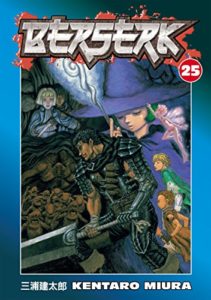 To earn charms to protect himself and Casca from the evil spirits drawn to their brands, Guts has agreed to help the apprentice witch Schrieke in defeating the trolls threatening the village. To aid them, Schrieke hands out magical weapons to Guts companions. Guts, however, needs only his sword.

Now the trolls are attacking. Guts and his companions will have to buy Schrieke time to cast her spell before they mob of monsters overwhelm them and pillage the village. But with the fabric of reality merging with the astral realm, the trolls aren’t the only monsters lurking out there.

Guts and his companions will have their hands full.

This volume is the sort of action BERSERK is known for. Miura’s art is detailed and at once beautiful and horrifying. He captures the highs and lows of the fight as it ebbs back and forth. Schrieke’s magic evokes awe while the trolls and other monsters capture they’re mythological roots but with the disturbing twist of Miura’s imagination.

An action-packed volume of the manga that keeps you turning pages. If you’re a fan of great fantasy, you need to read this series! BERSERK numbers among the best of fantasy art out there.

You can buy BERSERK Vol 25 from Amazon.