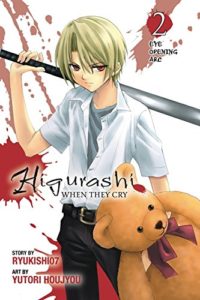 Boy, we are getting answers now. Confused on what was going on with Mion/Shion in the Cotton Drifting Arc, you will find out in this one. Wondering why Shion freaked out in the Saiguden? Yep, see what’s up with her.

This volume picks up a year before the main story where the last volume ended. Satoshi is suspected in the murder of his aunt. To give him an alibi, Shion claims to have been with him to Detective Oishi, forcing herself to reveal her true identity and drop her charade of pretending to be Mion. However, associating with Satoshi, whose family is hated by her powerful grandmother, lands Shion in trouble.

Her family has a dark history. They have long been connected with the yakuza. To show her restitution for her actions, and to protect Satoshi from the Sonozaki’s power, Shion proves her contrition by self-mutilation.

She has to rip off three of her fingernails. It’s painful to read. It’s horrible to witness her going through such pain. But she loves Satoshi. She will endure it for him.

But, as we know, Satoshi disappears. It doesn’t matter that Shion offered up her pain to save him. It festers inside of her. She blames her family for his disappearance while trying to convince herself that he just ran away, a murderer on the run.

And then we jump to the present story. Keiichi’s arrival sends Shion’s careful world into chaos and ushers us into the events we witnessed in the Cotton Drifting Arc from her perspective.

This is a powerful volume. The fingernail scene is so hard to read. You can feel her pain. The artist captured it well. You see Shion dealing with her grief and this strange presence she feels. That extra footstep we’ve seen from others in this story.

Is it Oyashiro? What is truly going on?

This volume ends on such a dark note. We’re about to find out just how involved the Sonozaki family is in what’s going on. Are they the culprits, or have they merely been blamed for events outside their control.

The story only gets better. The art is wonderful, capturing the emotion between the twins, the anger of Shion, and her pain. It is brought to life in such vivid ink.

You can buy Higurashi Eye Opening Arc 2 from Amazon.