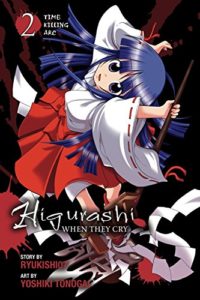 Akasaka, a detective investigating the kidnapping of Japan’s defense minister’s grandson, has come to Hinamizawa. The village, protesting the government’s plan to build a dam that will flood their valley, have grown violent. The long shot that they might have kidnapped the kid has paid off.

Akasaka has a lead.

With Oishi, a local cop, Akasaka heads out. He’s about to find that the men who have the minister’s son are not your average citizens. They are armed and dangerous. Will he be able to survive. Rika has already promised that he’ll regret not going home. Is he going to die to save the kid.

Well, no, we know he lives. This is him talking to Oishi seven years in the future. So what does Rika mean? What will Akasaka regret?

This chapter is intriguing. We have Rika with knowledge of the future. She knows events that always happens, including her own murder. Something is definitely wrong in Hinamizawa. We have plenty of suspects, but the clues are not lining up. This is the perfect ending to the Questions Arcs. We’ll transition to the Answer Arcs and see if our theories match up.

The story is poignant. Especially the parts in the present as Akasaka realizes that Rika’s predictions of the future all came true. That this poor girl was crying out for help and he was too wrapped up in his own grief and life to come to her aid.

Whatever is going on, Rika is at the center of it.

The art is beautiful. The story is poignant. It goes from the action pack fight to the surrealness of Rika. The story is great. It leaves you wanting more. Higurashi continue excelling as an intriguing and engaging mystery series!

You can buy Higurashi Time Killing Arc 2 from Amazon.