Memories of Ice (Malazan Book of the Fallen 3) 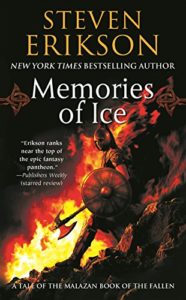 In Genbackis, in the aftermath of Pale and Darijistan, Dujek One-Arm and his Malazan army have gone renegade against the Empress. They need allies now to deal with a rising threat in the south, the Pannion Seer and his cannibalistic empire.

They must reach out to their enemies, Caladan Brood and his alliance against the Malazans. They have to parley with him and hammer out an alliance between dispirited groups, including the revelation that the child Silverfox contains the souls of two Malazan sorceresses reborn into a new entity.

Paran, now commanding the Bridgeburners, has to grapple with his new powers growing in him mixed with his lingering affection for Tattersail, one of the souls forming the child Silverfox. He needs to deal with the growing incursion of the Crippled God interfering in the world. This growing threat may be behind many dark events rippling across the world.

In Capustan, the Gray Shields have been hired to defend the city from the approaching army of the Pannion Seer. A religious, mercenary group dedicated to the God Fener who suffered mishap on the far side of the world. As the Pannion Seer approaches, they face the impossible task of saving the city from the cannibal horde and the demonic undead about to tear them apart.

Lastly, the T’lan Imass gather, summoned by Silverfox. The undead’s 100,000-year long war may finally be coming to an end if Silverfox grants them what they crave: freedom from the mistake they made all those eons ago.

And that’s just some of the storylines found in this book.

War, death, love, guilt, forgiveness, and grief fill the pages of Memories of Ice. A powerful novel with dozens of compelling character all vying for their own goals, trying to overcome the danger of the Panion Seer and fix the wrongs that happened in the distant past.

This story is epic and dark, full of brief moments of joy amid that dark depths of humanity. Erikson shows us how the human spirit can be wrapped and mangled, how entire civilizations can go mad and descended into barbarity. Erikson never finches from the worst aspects of humanity. Despite that, his characters fight for themselves, for those they love, for strangers that they never met but are united against the same fight against the horrors of war and genocide.

Memories of Ice is one of the most compelling fantasy books I’d ever read.

You can buy Memories of Ice from Amazon!