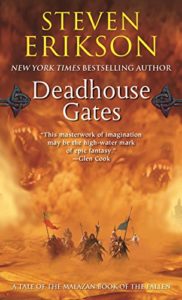 The Seven Cities Continent, conquered by the Malazan empire a few decades back, simmers with rebellion. The desert tribes and the discontented townsfolk are all waiting for Dryjdna, the Goddess of the Apocalypse, and her priestess Shike to declare the rebellion has begun. Knives are sharpened. Plans are made.

Coltain, the Wickan war chief, has come to Seven Cities to take command of the 7th Army. The former tribal leader turned general for the Empire will bring his own discipline to the 7th. He doesn’t have much time to whip them in shape before rebellion explodes. When it comes, the 7th will have to battle their way across the entire continent to reach aid.

In Malaz City, the Empire’s capital, the nobility is being purged. Young Felisin, the sister of Paran from Gardens of the Moon, has been sacrificed by her Tavore. Chained with the other prisoners, including an ex-priest of Fener named Heboric, she finds herself dragged through the mob-filled streets on her way to the prison ship to the mines near Seven Cities. To survive, she’s going to have to shed her innocence.

Will it destroy her?

Crokus is traveling with Apsalar, freed from her possession by the God of Assassins, with Kalam and Fiddler. The young lad is suspicious of Kalam and Fiddler’s motivation and he’s soon found correct when he learns the pair harbor their own mission to assassinate Empress Laseen for her betrayal of the Bridgeburners. To do so, they have to cross the continent about to be torn apart by rebellion and reach the mythical Deadhouse in the heart of the holy desert.

Will Kalam and Fiddler’s desire for revenge prevent Apsalar from returning safely home?

In the Holy Desert of Raraku, convergence happens. Relationships are forged and shattered. Revelations are unveiled. Deadhouse Gate is Erikson through and through. Dozens of storylines, diverse characters with all their own motivations clashing endlessly together, insane magic, climactic battles, and tragedy.

Pathos drips across the pages of Deadhouse Gates. Erikson doesn’t flinch from the darker aspects of humanity. From the atrocities that break out in war and rebellion. No one’s hands are clean in the trenches.

Erikson has a unique style of storytelling that draws you in. It’s masterful and stunning in the breadth and depth of his characters. If you are looking for good fantasy, then you have to check out Malazan Book of the Fallen. This is an amazing series that all fans of fantasy should read!

You can buy Deadhouse Gates from Amazon!