The Heart of What Was Lost 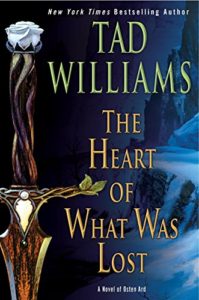 The Storm King has fallen. The Norns have been defeated. And now Duke Isgrimnur, under the commands of the newly crowned King Seomon and Queen Miramele, seeks to end the threat of the dark and immortal race of fairies once and for all. After the misery they and their Queen caused to Osten Ard in the events of the Memory, Sorrow and Thorn trilogy. With them travels two Predurinese mercenaries, men far from home and thrust back into another war.

Viyeki is a Norn builder, fleeing north with the remnant of his people who survived the battle at the Hayholt. Hunted by Duke Isgrimnur’s army, seeing little hope for survival, they prepare to defend their people’s mountain fastness against the mortals. But the Norns stand at a crossroads: do they die in a hopeless standa against the mortals, or do they find a way to survive?

And will the mortals even let them?

The fate of an immortal race hangs in the balance as they pay the price for the crimes of their Queen. The Heart of What Was Lost is a fascinating story, diving into the culture of the “evil” race from the original trilogy, showing their character, the arrogance that has led to their disdain of humans, the scores of vengeance they remember inflicted upon them by men long dead, and their obsession with the past. With what was lost.

Like most fantasy series, Tad Williams ended his with the Norns defeated and assumed by the readers to be finished. But by returning to them, he has a chance of showing us a side to his enemies, to give them a chance to grow and change and learn from their mistakes. Or to cling to the past and fall into extinction.

Fans of Williams work, especially his Memory, Sorrow, and Thorn trilogy, need to read this book. I have a feeling it sets up his new sequel series just debuting wonderfully. It is a great Fantasy read about the clash of cultures and the weariness of war upon the soul.

You can buy The Heart of What Was Lost from Amazon!