Book 1: The Darkness that Comes Before 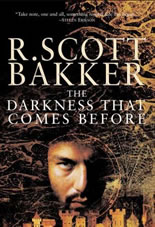 More than a few years back, I was in the Borders (yep, that far back, I miss you Borders) at the SeaTac Airport killing time before my flight. While browsing the fantasy section, the Darkness that Comes Before caught my eye. I read the description on the back with talk of an apocalyptic past and a gathering crusade. The book promised a mysterious traveler named Anasûrimbor Kellhus. I was hooked. I bought the book on the spot and devoured it on my trip. I have since come to love the Prince of Nothing Trilogy and its sequel the Aspect Emperor Trilogy. Together these two series plus a third as yet written series form the greater Second Apocalypse meta-series.

R. Scott Bakker is a controversial author. His books are deep in the genre of modern fantasy called Grimdark. And that is what it is. He has created a world whose roots mankind struggles to rise from. It is not a pleasant place. Very few people are allowed the luxury of agency, and those tend to be men. Like most of human history, women hold little power in his series. He is accused of misogyny. There will be no female character bootstrapping feminism and rising above the shackles placed upon her.

But calling his books misogyny is missing the point. R. Scott Bakker is showing just how bad humans can get. He is also writing this towards men, not to show them treating women is bad but to illuminate some of the darker aspects of male fantasy and thoughts while at the same time showcasing the misery most of human kind has toiled under through most of our history. If anything, I would say the books are more misandrist. The every man a rapist trope is almost a reality in this series.

But there is still hope and light to be found.

With the third book of the Aspect Emperor Trilogy, the Great Ordeal (formally titled the Unholy Consult), release approaching in July I felt the need to reread the series in preparation. Of course, there is no way for me to even hope to catch up before the release, but I’ll give it a valiant try. This is a repost of a blog series I never finished from four years ago on my original blog, the ReReid blog (see, I was trying to be clever). But no one ever visited my blog so after several months, well, my interest wained.

So without further ado, let’s dive into the Darkness that Comes Before.

SPOILOR WARNING: Please read the book before any of these posts. This is intended for those who have read the books. I will discuss both the events of the chapter and even their ramification for future events.

Bakker opens the book with a quote. Not a fictitious quote from his own setting, but a quote of the German philosopher Nietzsche.

“I shall never tire of underlining a concise little fact which those superstitious people are loath to admit—namely, that a thought comes when ‘it’ wants, not when ‘I’ want…”

—Friedrich Nietzsche, Beyond Good and Evil

Philosophy is a large part of the Second Apocalypse and Bakker starting the series with a quote of Nietzsche informs us of one of the major themes he will explore in the series. Nietzsche was an atheist who promoted the philosophy that without God there is no moral authority upon man. Nietzsche believed in ideas like “self-consciousness,” “knowledge,” “truth,” and “free will” were inventions of moral consciousness. Nietzsche believed the “will to power” explained all human behavior.

According to Nietzsche, the will to power illuminated all human ambition—the drive to succeed, and reaching the highest position in life. In Beyond Good and Evil, Nietzsche writes, “Even the body within which individuals treat each other as equals…will have to be an incarnate will to power, it will strive to grow, spread, seize, become predominant—not from any morality or immorality but because it is living and because life simply is will to power.”

The quote that Bakker opens his book is quite clear that we human have no control over the origin of our thoughts. This idea is directly related to the title of the book and one of the overarching themes of the series—the Illusion of Free Will.

If you haven’t gotten bored yet, click her for the Prologue

2 thoughts on “Reread of the Darkness that Comes Before: Intro”